There are a couple of new updates to the Google algorithm that have just been released, one a Panda update and the other labeled the “Webspam” update, and these latest algorithmic changes are affecting several sites that use exact match domain searches…among other things.

The Most Comical Google Webspam Update: Viagra Can’t Keep It Up 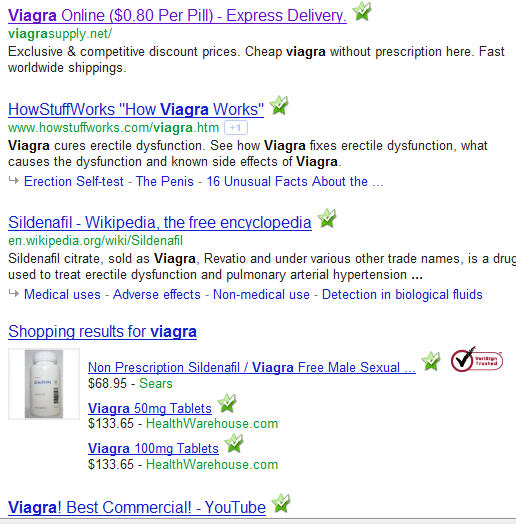 In an effort to thwart those who try “game Google” buy buying domains names that match the exact terms that they want to rank for, Google has completed devalued and in fact penalized “exact match domain names”.

Let’s take a look at an example of this. Let’s say that you realize that many people type “how to cook steak” in the search engines. One tactic to try to monopolize this term is to buy the exact match domain called “howtocooksteak.com” and then build a website that you hope will be the #1 result for that term. In the past, having an exact match term in the domain name drastically improved your chances of ranking for a term.

The new Google Webspam update, which some refer to as Penguin, actually seems to count this against you and one prominent example is Viagra. As you see in the search results graphic above, Viagra.com does not rank for the term “Viagra” anymore. I had read that this was fixed (and probably will be by the time that you read this) but whatever Google datacenter that I am hitting does not return Viagra.com in a search for Viagra on the first page of the results. It actually appears half way down the second page right now.

You’re on it right now. This is my professional site and every single article is original and written by yours truly, Richard Cummings. I don’t do much SEO for this site and almost every inbound link is a natural one from someone who liked an article I wrote. Thus, a search for “Richard Cummings” would always return this site on the first page of Google, usually between locations 3 and 9.

Today, I don’t exist for that search term and the only reasonable conclusion is that it is an “exact match” domain issue because my site is http://richardcummings.info.

The Internet is abuzz about the latest Google Panda and Webspam updates. On a personal level, I find the Viagra situation kind of funny and the fact that my site is no longer returned for my name is not going to break me. Perhaps it will return after Google implements fixes.

However, for many, this is a very serious issue.

Take a look at some of the quotes from around the Internet today.

From a user who lost nearly all rankings in one day…

Please Google. Don’t dash my hopes that 10 years of hard work building the most user friendly site in our industry wasn’t in vain…

Another web owner who lost all rankings says:

Is this the week that the world turns back to Bing and Yahoo? I for one like their new look and my website shows in the rankings as well as it ever did, which at least brings in SOME traffic to my site since Google has disowned it.

Not that it will make any difference or even get noticed but the recent update is ruining me.

I work hard to build good sites, with unique content, and the result is being dropped behind lesser sites. After all, haven’t we been taught SEO all these years as a way for people to find us based on relevancy?

I have two small boys and a wife with a brain tumor, so this is really the last thing we need, to be ruined this way without seemingly having done anything wrong. In fact, doing what we were TOLD to do!

Again, I understand this is a worthless exercise here, more for my own therapy as I try to deal with this development.

There is no question so no comments are needed.

All of these stories and more can be found on this Google Webmaster forum.

Should Google Do Anything Different?

In a recent article entitled Google Then and Now, I discussed whether Google was losing their way or finding it.

This latest change indicates to me that they are losing a bit of perspective or, at a minimum, customer appreciation.

To those honest folks–the ones who create great content and have been de-indexed, who basically lose their livelihood because of Google algorithmic changes, Google would retort, “Well, we have to do what is best for our business and, after all, you have made money off of our services for many years.”

True, however, if you look at the sum of the parts–the collective web content creators who place Google AdSense on their sites, Google has earned billions off of their efforts as well.

Don’t they owe some sort of explanation?